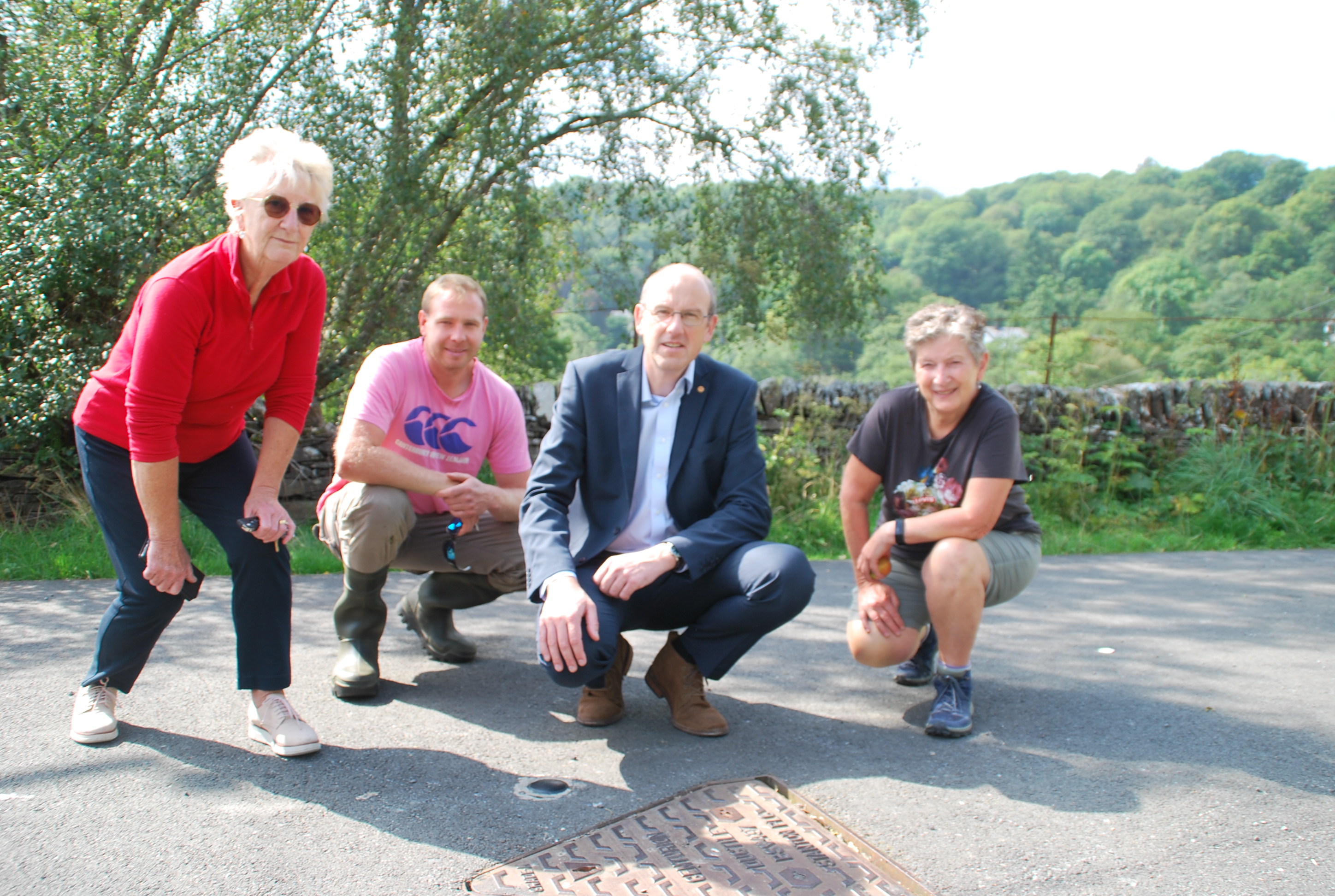 Picture caption, from left: Conwy county councillor Liz Roberts, Capel Curig community council chair Gethin Davies, Llyr Gruffydd MS, community councillor Shan Ashton.
Plaid Cymru's North Wales MS has called for urgent action by Dwr Cymru-Welsh Water over complaints that raw sewage is running through a popular holiday destination.
The village of Capel Curig in Eryri (Snowdonia) has a population that quadruples in the summer and the drainage system can't cope with the added pressure as well as increasing downpours.
Llyr Gruffydd, Plaid Cymru's North Wales MS, met with local representatives this week to discuss the problem on site.
Gethin Davies, chair of Capel Curig community council, said: "We've met with Dwr Cymru and they've acknowledged the problem but say they have no funding in place to improve the drainage. Yet when farmers are told to make improvements to ensure water quality, we're not able to use the excuse that we can't afford it."
Residents say that part of the problem is that the Victorian drains go from a 16-inch pipe down to a nine-inch pipe and when there is heavy rain, this leads to drains overflowing and raw sewage bursting up and flooding roads as well as leaching into the nearby river.
Llyr Gruffydd said: "It's a combination of problems that is affecting the village and becoming more acute by the year. It's not helpful that Dwr Cymru has dismissed the problem because it's seen as a small rural community. The climate is changing with more extreme downpours affecting places like Capel Curig - Dwr Cymru needs to build resilience into the system or it will face greater problems down the line as water supplies become compromised by human faeces.
"It also puts at risk the area's tourism industry. Who wants to visit somewhere where raw human sewage is present in car parks and roads?"
Local county councillor Liz Roberts added: "This has been a problem since 2004. This is a small community but that doesn't mean it should be ignored by a big company such as Dwr Cymru. We have as much right to have clean water and decent sewage services as any large town or city. I have the feeling that they believe they can ignore us because we're what they call a 'hamlet' and that's why I'm grateful that Llyr Gruffydd has been here today to see for himself the problems we face."
Community councillor and litter campaigner Shan Ashton said the pressure on the drainage system meant that, in extreme situations, the drain cover shot up in the air under pressure from the human waste. She added: "Dwr Cymru know there's a problem but are refusing to improve their drainage system. The whole system needs upgrading but the problem is being ignored by Dwr Cymru. It’s a health hazard and totally unacceptable in the 21st century. That's not good enough and the residents of Capel Curig deserve better."

Llyr Gruffydd said he would be taking up the matter with Dwr Cymru as there was a real risk to human health from the raw sewage.
Capel Curig Dwr Cymru
Do you like this post?
Share Tweet